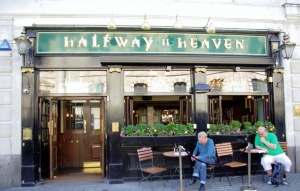 Halfway to Heaven, September 2012
Half Way to Heaven (also shown as "Halfway II Heaven") is a traditional pub on the ground and basement levels near Charing Cross Station in the West End of London. It is so named because, when it was one of half-a-dozen gay bars in the West End, it was located between Soho (where gay people drank in the evening) and the night club Heaven, where many people went when the pubs closed at 11pm, the traditional (and previously, legal) closing time for pubs.

Half Way to Heaven was one of the official participating venues in the first Soho Pink Weekend pub crawl in 1994, organised by Gary Henshaw. Depicted on the official pub crawl map, designed by Jonathan Harbourne (who produced The Back Pocket Guide to London), the pub's icon was a Zimmer frame, insinuating that it was frequented by older people. The pub complained, but the illustration was later bought by The City of Quebec, who used it as a humorous way to promote their pub as attractive to an older crowd.

The pub now hosts regular drag shows on the weekends.