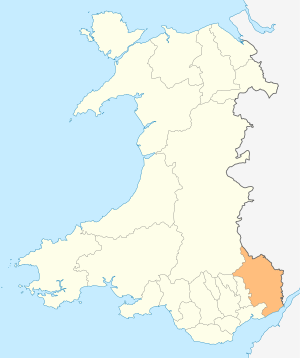 Location of the current Monmouthshire district within Wales
Gwent is a preserved county in south-east Wales. Gwent County Council was formed in 1974, and named after the ancient kingdom of Gwent. The county corresponded closely to the previous county of Monmouthshire, which had had an ambiguous status, being considered as if part of England, but always included with Wales in legislation. Since 1974 Gwent has been definitively part of Wales.

The county council was abolished in 1996, but Gwent still exists for ceremonial purposes as a prserved county. It now covers several administrative districts, namely Blaenau Gwent, Caerphilly, Monmouthshire (covering only part of the historic county of that name), Newport, and Torfaen.

Gwent Police remains the police force for the area.

The South East Wales LGB Forum was formed in 2004.

The Gwent LGB&T Community Safety Forum aims to ensure that LGB&T people throughout Gwent have access to justice and are treated fairly .[1]

In 2011, five Gwent LGBT Liaison Officers filmed a DVD about their experiences.[2]