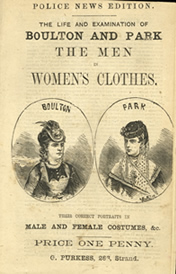 Boulton, son of a stockbroker, and Park were great friends who liked to cruise round London night-spots in drag and were often mistaken for women. Boulton had liked wearing female clothing from childhood and was encouraged in his impersonations of maids and other women by his mother; he used the nickname "Stella". Park, for his part, went under the soubriquet of "Fanny Graham". A third person involved in the affair was Lord Arthur Clinton, who had lived with "Stella" as his/her "husband" and had exchanged love letters with him.[1][2] 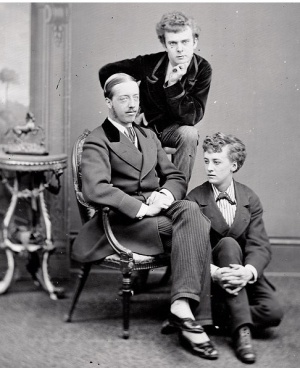 Fanny resting on the shoulder of Lord Arthur Pelham-Clinton, son of the Duke of Newcastle, at one time the lover of Stella, sitting on floor
The indictment was against Lord Arthur Clinton, Ernest Boulton, Frederic Park, Louis Hurt, John Fiske, Martin Gumming, William Sommerville and C H Thompson. The last three absconded before the trial. Lord Arthur died on 18 June 1870, the day after receiving his subpoena for the trial, ostensibly of scarlet fever but more probably a suicide.[4]

The trial was presided over by Sir Alexander Cockburn, the Lord Chief Justice. At the hearing Boulton and Park's lifestyle attracted great public interest, especially when a trunkful of their dresses was brought in as evidence. However, the unreliability of the witnesses and the breach of human rights involved in their physical examination by the police without higher authority swayed opinion in their favour. The prosecution was unable to prove that they had either committed any homosexual offence or that men wearing women's clothing was an offence in English law. Cockburn's summing up was critical of the prosecution case and the police's violation of the defendants' rights. After deliberating for fifty three minutes the jury found them not guilty.

The case demonstrated the relative freedom of the Victorian homosexual sub-culture at this time before the Labouchère Amendment later in the century made it easier for the authorities to prosecute homosexual men, as in the celebrated trial of Oscar Wilde.

Boulton and Park appear as characters in The Sins of the Cities of the Plain (1881) a pioneering work of homosexual pornographic literature. In this story the cross-dressing narrator recounts how he meets Boulton and Park dressed up as women at Haxell's Hotel in the Strand with Lord Arthur trailing along behind. Later on the narrator spends the night at Boulton and Park's rooms in Eaton Square and the next day has breakfast with them "all dressed as ladies".[5]