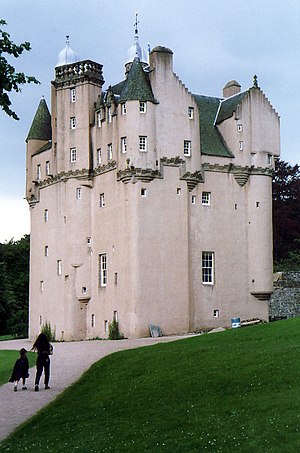 Craigevar Castle, Aberdeenshire, home of the Forbes family (now owned by the National Trust for Scotland)
Sir Ewan Forbes (1912–1991) was a Scottish doctor who registered a change of gender and became a baronet. At birth he was registered as female, and baptised Elizabeth Forbes-Sempill, youngest daughter of the 18th Lord Sempill, who was a baronet as well as a baron. On Lord Sempill's death in 1934, both the barony and the baronetcy passed to Elizabeth's elder brother.

From 1945 onwards, Elizabeth began living as a man, and obtained a warrant for birth re-registration from the Sheriff of Aberdeen. He issued an advertisement in the Aberdeen papers that he wished to be known as Dr Ewan Forbes-Sempill. In 1952 he married his housekeeper, Isabella Mitchell.

In 1965 Dr Forbes-Sempill's brother, the 19th Lord Sempill, died. The barony passed to his daughter, but the baronetcy legally could only pass in the male line. It was assumed that Dr Forbes-Sempill would succeed to the baronetcy but this was challenged by a cousin on the grounds that the re-registration was invalid and he was still legally a woman. The Scottish Court of Session found in his favour, and in 1968 the Home Secretary confirmed that he should be registered as Sir Ewan Forbes of Craigievar, 11th Baronet (having dropped the Sempill part of his name).

The whole case was conducted in considerable secrecy, and was therefore not able to be quoted as a precedent in later cases.