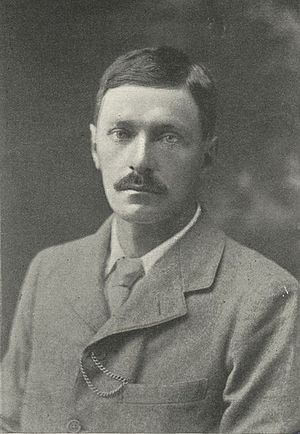 E F Benson
E F Benson (Edward Frederic Benson, 1867–1940, known to his friends as "Fred") was a novelist and short story writer, best known for the "Mapp and Lucia" books.

He was born at Wellington College. His father, Edward White Benson, later Archbishop of Canterbury, was the first headmaster of Wellington, and his mother, Mary Benson, was the sister of the philosopher Henry Sidgwick; after her husband's death she set up home with Lucy Tait, daughter of the previous Archbishop. E F was the brother of A C Benson, who wrote the words to "Land of Hope and Glory", Robert Hugh Benson, priest, author, and friend of Frederick Rolfe, and Margaret Benson, egyptologist.

E F Benson was educated at Marlborough College and King's College, Cambridge. He never married, and is likely to have been homosexual.[1][2] Certainly this reveals itself through the camp humour of his novels, the implicit homoeroticism of his university works such as David Blaize (1916), his love of the company of handsome men, and his close friendships with known homosexuals such as John Ellingham Brooks with whom he shared a villa in Capri.[3] Prior to the First World War the island was extremely popular with wealthy gay men.

In 1918 he moved to Rye, Sussex, and lived for many years at Lamb House, which had previously been the residence of Henry James. In the Mapp and Lucia novels, Rye is called "Tilling", and Lamb House is "Mallards".