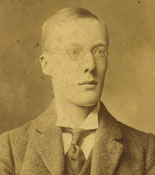 He was born at Ribston Hall, Yorkshire and studied music at Eton College and King's College, Cambridge. He was elected a fellow of King's in 1902. He was part of a circle of gay men at Cambridge which included A T "Theo" Bartholomew. In the summer of 1915 they met Gabriel Atkin who was in Cambridge for his officer training. In August that year they also met Siegfried Sassoon who arrived in Cambridge for the same reason. Gabriel Atkin had already left but Dent engaged in some matchmaking and encouraged Siegfried Sassoon and Gabriel Atkin to meet, which they did in November, 1918. This was the start of an affair of several years.[1]

In 1918 Dent moved to London and became a music critic, returning to Cambridge in 1926 as Professor of Music.[2] In 1928 he helped to found the International Society for Contemporary Music, becoming its President. In 1941 he moved to London.

His closest friends were Lawrence Haward and J B Trend, but in 1902 he began a close friendship, lasting the rest of his life, with Clive Carey, then a 19-year-old organ scholar at Clare College. Another friend was E M Forster, who represented him as the character "Philip Herriton" in Where Angels Fear To Tread.[1]