From LGBT Archive
(Redirected from City of Birmingham)
Jump to: navigation, search 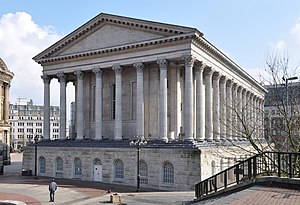 Birmingham Town Hall
Birmingham is a city and metropolitan borough in the West Midlands (originally in Warwickshire). It is the second largest city by population in the UK. It rose to prominence in the 18th century as a centre of manufacturing, especially small and specialised trades. The city boundaries have expanded considerably since the 18th century, most recently by absorbing Sutton Coldfield (still considered a separate locality for census purposes) in 1974.

Robert Taylor (photographer) was born in Birmingham in 1958.

The Birmingham CHE Group was founded in 1970.

The Birmingham Gay Village, near the Chinese Quarter, is mainly located around Hurst Street.

Birmingham LGBT was set up in 2002, with the aim of reinvigorating the diverse LGBT community in the city.[1]

In 2011 Symon Hill walked from Birmingham to London, as a pilgrimage of repentance for homophobia.

Birmingham Pride is held annually in May. It claims to be the largest LGBT two day festival in the UK.[2] Pride events were held for a few years from 1972, resuming in 1983.

Gay Birmingham Remembered is a website based on oral history and other research, recording the development and history of the LGBT community in and around Birmingham.