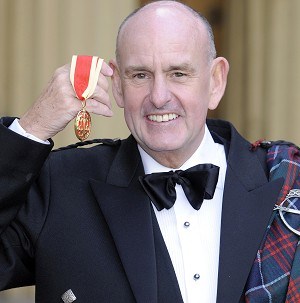 Sir Charles Allen after receiving his knighthood
Charles Allen (Charles Lamb Allen, Baron Allen of Kensington, born 1957) is a Scottish businessman and broadcaster. He was Chief Executive of ITV plc from its formation in 2004 until 2007. He was chairman of the music company EMI from 2008 to 2010. In March 2012 he was appointed Chairman of the Executive Board of the Labour Party. In August 2013 he was elected chairman of the Danish facility service group ISS A/S.[1]

He was chair of the 2002 Commonwealth Games, for which he received a CBE, and was knighted in the 2012 New Year Honours "for services to the 2012 Olympics and Paralympics". On 25 May 2012, he was named as Mayor of the Olympic Village in London for the duration of the Olympics. He received a peerage in 2013.

"Millionaire ITV chief Allen, 49, started out as an accountant for contract caterer Compass before joining Granada in 1991 where he was famously savaged by John Cleese as an "upstart caterer". Fifteen years on, the tenacious Scot is facing one of his biggest challenges in reversing the declining fortunes of ITV."[2]