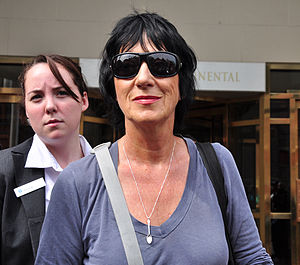 She was born in Manchester, but raised in Ontario, Canada. Her provocative blend of hard-edged new wave rock with explicit homoerotic and BDSM-themed lyrics made her one of the first openly lesbian entertainers in the world to achieve mainstream fame.[1]

In 2000, Random House published Pope's autobiography, Anti-Diva. The book included Pope's first public acknowledgement that she had been in a relationship with Dusty Springfield in the early 1980s.[2] She also claimed to have had a brief romance with Andrea Martin of Second City Television fame.[2] As of April 2013 a film version of her biography was under development.[1]

Soon afterward, Pope re-recorded the Rough Trade single "High School Confidential" which has been described by Cashbox Magazine as one of the most explicitly sexual songs to chart in Canada[1] for the American version of Queer as Folk. She appeared in the Toronto production of The Vagina Monologues in 2001, then moved to New York City to continue writing and recording.

Derived from a Wikipedia article.