The Caravan Club was a gay club that opened in July 1934 at 81 Endell Street, Covent Garden, London. Jack Neave, who ran several night clubs, had met William Reynolds who was looking to invest a recent inheritance. They rented the Endell Street basement for £300 from "one of the many shady estate agents in the West End who specialise in letting premises to shady clubs and prostitutes" [1]. They charged 1 shilling for membership or 1 shilling and 6d (seven and half new pence) on the door. Within six weeks it had 445 members and attracted 2004 visitors. [2]. It was decorated in an oriental style. Inside men could dance, kiss and have sex. Its advertisement flyer read: 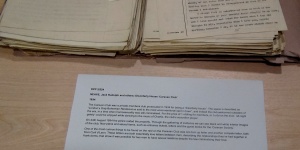 Item from The National Archives concerning prosecution, displayed at event on 22 July 2017 to mark 50 years since the Sexual Offences Act 1967


All night gaiety – dancing to Charlie
Periodical night trips to the great open spaces, including the Ace of Spades, etc [3]

The London District Command accused the venue of corrupting service-men and had the place patrolled by the military police who tried to keep it out-of-bounds. Then came pressure from the Public Morality Council (PMC) who were surveying 25 venues by special request, and the Caravan was finally prosecuted in 1934, along with dance halls in Baker Street and Archer Street and a ball room in Holland Park Avenue.

The Caravan was raided by police on August 24 1934 after letters from Holborn Council and ratepayers from Endell Street complained the the place was "frequented by sexual perverts, lesbians and sodomites... an absolute sink of iniquity, your prompt attention is respectfully craved[4]. The club owners were prosecuted, found guilty and sentenced to 12 months imprisonment and 20 months hard labour respectively for having a 'disorderly' house [5].