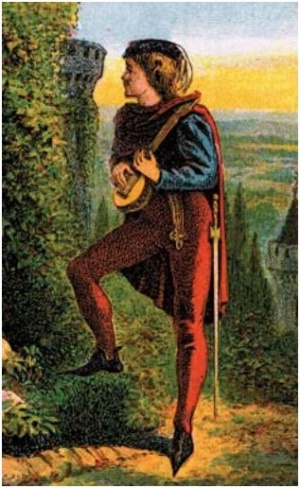 Blondel de Nesle plays music for King Richard I outside the prison
Blondel (Jean de Nesle, c. 1155–1202) was a French minstrel or trouvère and composer, nicknamed Blondel because of his long blond hair.

According to legend he was a close friend of King Richard I. When the king was held prisoner after the Third Crusade, Blondel went from castle to castle to find where the king was held, and singing a particular song that only he and the king knew. At last he sang outside Dürnstein castle, and sang his song. Richard answered with the second verse, thus revealing where he was held.

This legend seems to have little basis in fact; however some writers, such as Norah Lofts in her 1951 novel The Lute Player have surmised a gay relationship between Blondel and Richard. According to other authorities, the composer Blondel may actually have been Jean de Nesle's son of the same name.

Stephen Oliver wrote a musical based on his life..