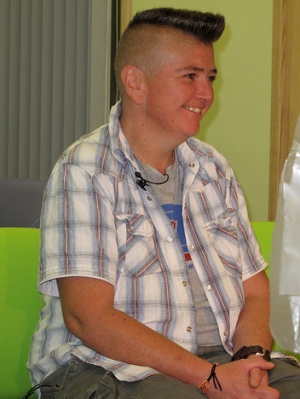 Huffty
Andrea Huftika Reah,[1], born c.1969, better known as Huffty, is a television personality. She was a presenter of Channel 4's 1990s television series, The Word.[1] In his autobiography My Word host Terry Christian said that Huffty, a Catholic lesbian from Whitley Bay who is listed in the alumni of Whitley Bay High School, was a nice girl and not suited to the cut and thrust of television.[2]

Prior to presenting The Word, she had been part of the cabaret duo Boo, was as a youth worker, and acted in two stage plays.[1]

Huffty presented the show for only one series, but achieved popular recognition. She also appeared on the Harry Hill show in the late 1990s.

She was one of the guest stars at Pride Scotia in 1998.

She appeared in Geordie Finishing School for Girls on BBC Three in July 2011.[3]