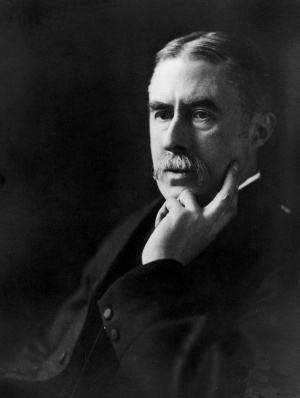 Alfred Edward Housman (26 March 1859 – 30 April 1936), usually known as A E Housman, was an English classical scholar and poet, best known to the general public for his cycle of poems A Shropshire Lad. Lyrical and almost epigrammatic in form, the poems were mostly written before 1900. Their wistful evocation of doomed youth in the English countryside, in spare language and distinctive imagery, appealed strongly to late Victorian and Edwardian taste, and to many early 20th century English composers (beginning with Arthur Somervell) both before and after the First World War. Through its song-setting the poetry became closely associated with that era, and with Shropshire itself.

He was the brother of Laurence Housman the playwright and founder of Housman's Bookshop.

Housman was counted one of the foremost classicists of his age, and has been ranked as one of the greatest scholars of all time. He established his reputation publishing as a private scholar and, on the strength and quality of his work, was appointed Professor of Latin at University College London and later at the University of Cambridge. His editions of Juvenal, Manilius and Lucan are still considered authoritative.

While a student at St John's College, Oxford, Housman formed strong friendships with two fellow students, Moses Jackson and the painter Alfred W Pollard. Jackson became the great love of Housman's life, though the feelings were not reciprocated, as Jackson was heterosexual.[1]

In 1942 Laurence Housman deposited an essay entitled "A E Housman's De Amicitia" in the British Library, with the proviso that it was not to be published for 25 years. The essay discussed A E Housman's homosexuality and his love for Jackson.[2] Despite the conservative nature of the times, Housman, as distinct from the prudence of his public life, was quite open in his poetry, and especially his A Shropshire Lad, about his deeper sympathies. Poem 30 of that sequence, for instance, speaks of how "Fear contended with desire": "Others, I am not the first / have willed more mischief than they durst".

In More Poems, he buries his love for Moses Jackson in the very act of commemorating it, as his feelings of love break his friendship, and must be carried silently to the grave:.[3]

Because I liked you better
Than suits a man to say
It irked you, and I promised
To throw the thought away.

To put the world between us
We parted, stiff and dry;
Goodbye, said you, forget me.
I will, no fear, said I

If here, where clover whitens
The dead man's knoll, you pass,
And no tall flower to meet you
Starts in the trefoiled grass,

Halt by the headstone naming
The heart no longer stirred,
And say the lad that loved you
Was one that kept his word.[4]

His poem, "Oh who is that young sinner with the handcuffs on his wrists?", written after the trial of Oscar Wilde, addressed more general social injustice towards homosexuality. In the poem the prisoner is suffering "for the colour of his hair", a natural, given attribute which, in a clearly coded reference to homosexuality, is reviled as "nameless and abominable" (recalling the legal phrase peccatum horribile, inter christianos non nominandum, "the horrible sin, not to be named amongst Christians").