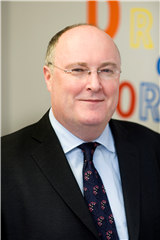 He has held a number of senior Government positions, including Director of Arts and Culture at the Department of Culture, Media and Sport. In November 2007 he was appointed Chief Executive of Arts Council England.[1]

"Times remain tough for Davey after last week's announcement that the Council will axe 118 jobs; meanwhile arts organisations continue to feel the pinch from the Council's funding cuts. On a more positive note, Davey has overseen the launch of online culture channel The Space."[2]