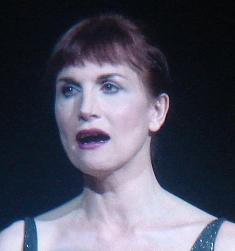 Anderson has appeared internationally in concerts, in theatrical plays, on the BBC Television program Gemma Masters. In addition, sometimes with Dillie Keane, Anderson writes lyrics to most of Fascinating Aïda's songs and has contributed to the songs of several hit musicals, including The Challenge (Shaw Theatre) and The Ten Commandments (The Place).

Anderson joined Fascinating Aïda in 1984, a year after its inception, and has performed with them ever since, including nationwide tours.[2]

Adèle Anderson was listed as a "National Treasure" in the Pink List 2011. The citation said:

"From Fascinating Aida. A Humanist, who opposed the Pope's UK visit and told The IoS in 1997 how hard it was to 'come out' as a trans woman."[3]