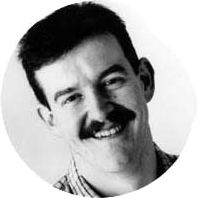 He was born in London, attended Westminster School, and studied classics at Trinity Hall, Cambridge. His father was a Welsh High Court judge. He is a regular contributor to The Guardian, The Observer, The Times Literary Supplement, and BBC Television's Newsnight Review.

His books of short stories, The Darker Proof (1987, written with Edmund White) and Monopolies of Loss (1992) deal with the AIDS crisis.