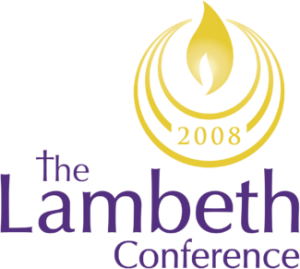 2008 conference logo
The Lambeth Conferences are decennial conferences of the Anglican Communion, convened by the Archbishop of Canterbury. The first Conference was held at Lambeth Palace in 1867.

The thirteenth Conference was held in 1998 and presided over by George Carey. It was decided, by a vote of 526 to 70, to pass a resolution (1.10) calling for a "listening process" in respect of homosexuality, but stating (in an amendment passed by a vote of 389 to 190)[1] that "homosexual practice" (not necessarily orientation) is "incompatible with Scripture".[2] A subsequent public apology was issued to gay and lesbian Anglicans in a "Pastoral Statement" from 182 bishops worldwide, including eight primates (those of Brazil, Canada, Central Africa, Ireland, New Zealand, Scotland, South Africa and Wales).[3] Division and controversy centred on this motion and its application continued to the extent that, ten years later, in 2007, Giles Goddard of Inclusive Church suggested in published correspondence with Andrew Goddard across the liberal–evangelical divide: "It's possible to construct a perfectly coherent argument that the last 10 years have been preoccupied with undoing the damage Lambeth 1.10 caused to the Communion."[4]

A controversial incident occurred during the conference when Bishop Emmanuel Chukwuma of Enugu, Nigeria attempted to exorcise the "homosexual demons" from the Reverend Richard Kirker, leader of the Lesbian and Gay Christian Movement, who was passing out leaflets. Chukwuma told Kirker that he was "killing the church"; Kirker's civil response to the attempted exorcism was "May God bless you, sir, and deliver you from your prejudice against homosexuality."[5][6][7]

(Based on a Wikipedia article)