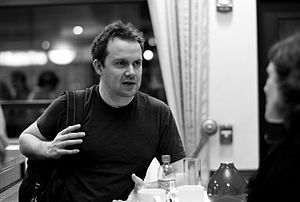 Tom Coates in 2007
Tom Coates (born in Reading, 19 July 1972) is a technologist and early weblogger based in San Francisco, California who has been writing the blog plasticbag.org[1] since 1999. He has written extensively about social software, the web of data, location services and future media distribution and launched the Fire Eagle location service for Yahoo in 2008.

Coates was educated at the Norwich School, the University of Bristol, and the London College of Printing. He worked at the BBC running an R&D team for BBC Radio, and before that he developed the geo-coded online community UpMyStreet Conversations. He has also developed online communities for emap and was Production Editor of Time Out's website. His professional written work includes film reviews for the BBC, contributions to Time Out city guides and comment pieces on technology for The Guardian.

Plasticbag.org won a Bloggies award in 2001 for "Best Gay/Lesbian/Trans weblog".[2]