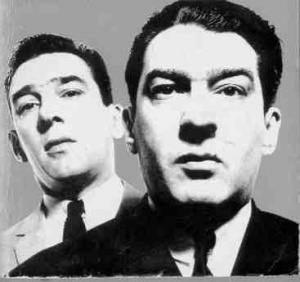 Reggie (left) and Ronnie Kray
Ronnie Kray (Ronald Kray, 1933–1995) was a gangster. Ronnie and his identical twin brother Reggie were amongst the leaders of organised crime in the East End in the 1950s and 1960s. Ronnie admitted to being bisexual.

The twins were born in Hoxton and the family moved to Bethnal Green in 1938. They both took up boxing. On being called up for National Service, they immediately went absent without leave, and were held briefly in the Tower of London. They were convicted and sent to a military prison.

On discharge from the army they both took up crime full-time, but also became fashionable nightclub owners, and mixed with celebrities in the 'swinging sixties' era.

In 1964, the Sunday Mirror reported that Scotland Yard was investigating a homosexual relationship between an unnamed peer (actually the Conservative peer Robert Boothby) and a major underworld figure (Ronnie Kray). Boothby wrote to The Times denying being gay, and said that he had only met Ronnie three times, and the Sunday Mirror was forced to pay him £40,000 to avoid a libel suit. However letters came to light in 2009 showing that there had indeed been a friendship between Ronnie and Boothby dating back at least to 1963.[1]

It was also rumoured that the Labour MP Tom Driberg had had a relationship with Ronnie.[2][3]

In 1966, Ronnie Kray shot and killed George Cornell, an associate of the rival Richardsons gang, in the Blind Beggar pub in Whitechapel; in 1967, Reggie Kray fatally stabbed a minor member of the Kray gang, Jack "the Hat" McVitie. In 1968 the brothers were both convicted of the murders, and sentenced to life imprisonment, with a minimum term of 30 years.

In 1979 Ronnie was certified insane, and transferred to Broadmoor Hospital. He died aged 1995 of a heart attack.