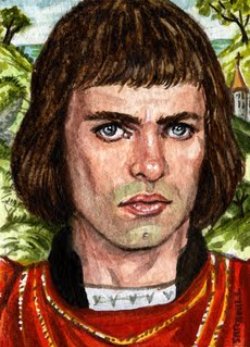 He was the son of Arnaud de Gabaston, a Gascon knight from Gabaston in south-western France who had served Edward's father, King Edward I. The king approved of the young Piers, and around 1300 brought him into the royal household, hoping he would be a good influence on the young Prince Edward, but by 1307 he had begun to disapprove of young Edward's excessive favouritism for Gaveston, whom he ordered to leave the realm. In July that year Edward I died having commanded some of his most trusted advisors to watch over young Edward, and specifically to prevent Gaveston from returning to England. However one of the first acts of young Edward as king was to recall Gaveston from exile.

In August 1307 Edward made Gaveston Earl of Cornwall, traditionally a title reserved for members of the royal family, and arranged for him to be married to his niece Margaret de Clare; the next year he appointed him to act as regent in his absence when he went to France to marry the French King's daughter. These signs of favour, towards a person of humble origin, offended some of the barons, who demanded that Gaveston should be exiled, and have his earldom removed. Edward felt obliged to agree to this, but turned the exile into an appointment by making Gaveston Lieutenant of Ireland, in which role he had some success in pacifying the country.

By 1309 the opposition of the barons had been relaxed and Edward was able to recall Gaveston to England, and to give him back the earldom of Cornwall. In 1310 Gaveston accompanied the king on a campaign against the Scottish king Robert the Bruce, and was left behind, as Lieutenant of Scotland when the king returned to London to meet parliament. The new parliament again called for Gaveston, to be banished, but he was reunited with the king by 1312. Some of the barons then raised an army against the king. Gaveston was captured and held at Warwick Castle. He was tried and condemned, and summarily executed at Blacklow Hill, near Kenilworth, Warwickshire.