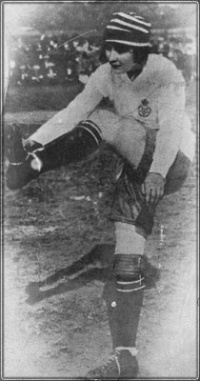 Lilian ‘Lily’ Parr (26 April 1905 – 24 May 1978) was an English professional women's Football player who played as a winger. She is best known for playing for the Dick, Kerr's Ladies team, which was founded in 1917 and based in Preston, Lancashire.[1]

In 2002 she was the only woman to be made an inaugural inductee into the English Football Hall of Fame at the National Football Museum.

Parr was born in a rented house in Union Street, Gerrard's Bridge, St Helens, the fourth of seven children born to George and Sarah Parr. Her father was a labourer at the local glass factory and the family rented out space in the yard and rooms at their house for extra income.

As a girl Parr displayed little enthusiasm for traditional pursuits such as sewing and cookery. Instead her fearless streak and robust frame allowed her to compete alongside boys in both football and rugby. Under the tutelage of her elder brothers she became proficient in both sports.

Parr played in the first ever recognised women's international football tournament between England and France in London in 1920. There were four games in total, and a crowd of 25,000 saw the Dick, Kerr's Ladies – representing England – win 2–0 at Deepdale, home of Preston North End.

The Dick, Kerr Ladies went on to tour France, playing against local teams.

At almost six feet tall, Parr's strength was said to be one of her greatest assets. She was particularly noted for the power of her kicking, both in delivering from the left flank and shooting at goal. Team mate Joan Whalley later wrote:

"She had a kick like a mule. She was the only person I knew who could lift a dead ball, the old heavy leather ball, from the left wing over to me on the right and nearly knock me out with the force of the shot..."[2]

The programme from a September 1923 fixture between Dick, Kerr's Ladies and Stoke described Parr as "Big, fast and powerful, is tricky and can take corner kicks better than most men." It also noted that Parr "scores goals from extraordinary angles with a left foot cross drive, which nearly breaks the net."

Aggression was another feature of Parr's play. During Dick, Kerr's Ladies' 1922 tour to the USA, the Washington Post reported that "Miss Lily Parr, at outside left, put up an aggressive game registering two goals in seven tries she had at the net" following a 4–4 draw with Washington's top male club. In April 1921 Parr and Hilda Durbar of Stoke United were sent off for fighting in Dick, Kerr Ladies' fractious 2–0 win before 13,000 fans at The Old Recreation Ground. Parr was also praised for her overall technique and vision. Contemporary Scotland international footballer Bobby Walker described her as the "best natural timer of a football I have ever seen."

After working in the Dick, Kerr & Co. factory Parr trained as a nurse. She worked in a mental hospital in Whittingham, Lancashire until she retired. While working at the hospital she continued to play women's football for the Preston Ladies until 1951. This included taking part in a further tour of France.

Parr lived out most of the rest of her life in Goosnargh, near Preston. She died of breast cancer in 1978, aged 73, and is buried in the town of her birth, St Helens, Merseyside.

Openly lesbian, Lily Parr lived with her partner Mary and has become a LGBT rights icon.[3][4]