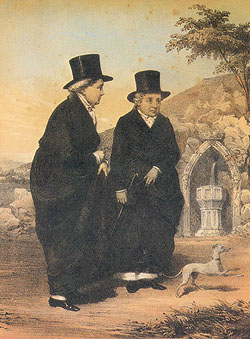 The Ladies of Llangollen, oil on canvas, J H Lynch, circa 1880
Lady Eleanor Charlotte Butler (1739-1829) and Sarah Ponsonby (1755-1832) were two aristocratic women of Anglo-Irish descent who scandalised contemporary society by leaving Ireland against the wishes of their families and setting up home together in Plas Newydd in Llangollen in 1780 as a lesbian couple. They often wore mens’ clothing.

The ladies had tried to leave Ireland before but had been prevented by their families, who disapproved of their desire for independence. However their second attempt was successful and they made their way to Wales, where a servant, Mary Caryll, later joined them.

Their portrait hangs in the National Museum of Wales in Cardiff, in their LGBT portrait section, at the very back of the gallery.

Once they had decided to make Plas Newydd their home the ladies set about transforming it, adding many Gothic features including oak carvings in the interior of the house. Their fame spread as their romantic relationship became known far and wide.

As well as working on their house and garden, the ladies spent their time in reading, studying foreign languages and corresponding with a wide variety of people. Many of these were well-known figures of the day and they often came to visit the ladies, mostly writers such as Robert Southey, William Wordsworth, Percy Shelley, Lord Byron and Sir Walter Scott, but also the military leader Duke of Wellington and industrialist Josiah Wedgwood. Some of their guests brought the ladies gifts in the form of oak carvings which were added to the house.

Lady Eleanor Butler died in 1829 and Sarah Ponsonby died two years later. They were buried in the church of St Collen in Llangollen. They left behind volumes of letters and journals which give a fascinating insight into their life together.

Their house is now a tourist attraction run by Denbighshire County Council.