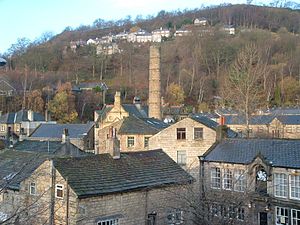 Hebden Bridge has attracted artists, and has developed a small New Age community. It became attractive in the 1980s and 1990s to lesbians as a place of mutual support to bring up children.[1] As of 2004 Hebden Bridge had the highest number of lesbians per head in the UK.[2][3]

In April 2005, Hebden Bridge was named the fourth quirkiest place in the world by High Life (the British Airways flight magazine) and was described as "modern and stylish in an unconventional and stylish way".[4]

In 2016 the first Happy Valley Pride was held in the town.