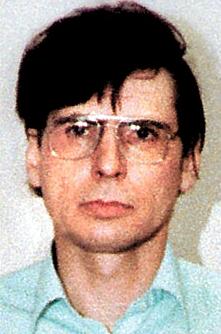 Dennis Nilsen
Dennis Nilsen born 1945 in Fraserburgh, Aberdeenshire, was a gay serial killer and necrophiliac, also known as the "Muswell Hill Murderer" and the "Kindly Killer".

He murdered 15 young men in London between 1978 and 1983. He retained his victims' bodies for extended periods of time before dissecting their remains and disposing of them via burning or flushing the remains down a lavatory. Nilsen was convicted at the Old Bailey in November, 1983 of six counts of murder and two of attempted murder.

His original sentence was later upgraded to a whole-life tariff, and he died in May 2018 at HMP Full Sutton maximum security prison in the East Riding of Yorkshire.[1]