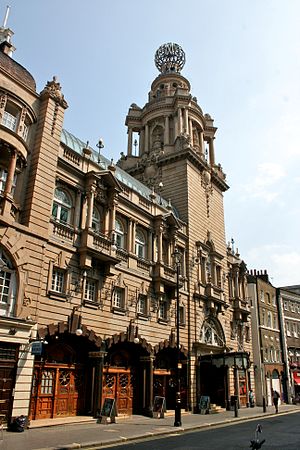 The London Coliseum
The Coliseum in St Martin's Lane (now home of the English National Opera) has the largest auditorium of all London's theatres. In 1916, when it was a music hall, the police were informed that the standing gallery had become a place of "indecent behavior among men". The hall had become popular for "male importuners" for several years and into the 1920s, despite it being patrolled regularly. Rather than cruising the streets, a half crown rover ticket could purchase the entry to large promenades, such as the Empire (converted to a cinema in 1927), Alhambra and Palladium theatres in London's West End. Men could circulate and socialise and meet new partners, as well as see some of the entertainment of the shows. It was an easy way to meet people without drawing attention to themselves as they might in cruising in streets, parks or public lavatories.

The cheaper Halls, the Prince of Wales and Collins were the most important cruising sites in the twentieth century.

By 1935 the use of these darkened music hall galleries had wained due to the changing cultural times, moving to the crowded dark gangways of cinemas. When the Public Morality Council (PMC) investigated the Coliseum in 1935 they found no evidence, "though, at times, men known to importune have been present".