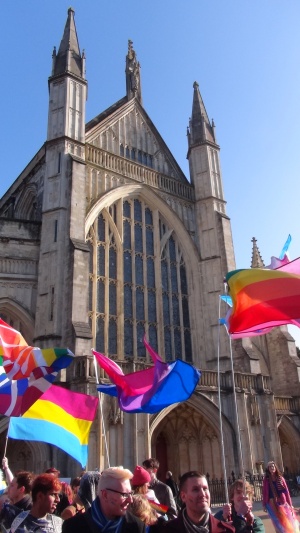 Winchester Pride 2018 outside the Cathedral (photo by Clifford Williams)
Winchester is a city in Hampshire. It was historically the capital of Wessex and for a time the capital of England. The current local government area City of Winchester also covers a large area of the surrounding countryside. Noted landmarks include the cathedral (the longest in Europe), the Great Hall (which contains "King Arthur's Round Table") and a public school, Winchester College.

Lord Alfred Douglas1884-1888 and Patrick Gale in the 1970s, both attended Winchester College.

The trial of Peter Wildeblood, Lord Montagu and Michael Pitt-Rivers was held in the Great Hall of Winchester in 1954 [1].

A young people's LGBT Group, called Y-Services , met weekly at the Carroll Centre in Winchester from the start of 2018 to the onset of Covid 19 restrictions in March 2020. The group was folded in 2021.

In the summer of 2019 Hampshire Record Office in Winchester had an exhibition on the county LGBT+ history which was created by the Y-Services young people's Heritage Lottery funded project [4].