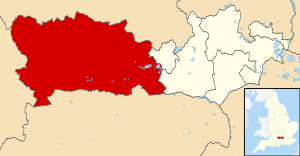 Lytton Strachey and Dora Carrington lived at the Mill House, Tidmarsh from 1917 to 1924 and at Ham Spray, near Hungerford from 1925 until their deaths in 1932.

In 2007 "Pink Tuesday" was launched as a gay night in the Bricklayers Arms, Newbury.[1]