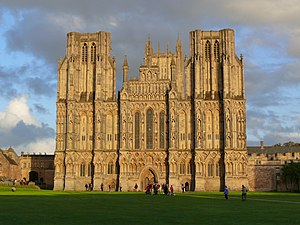 Wells Cathedral
Wells is a cathedral city in the Mendip district of Somerset.

In 1954 sixteen men were tried for gay sexual offences in the Wells area. Nine of the sixteen were sentenced to prison and one of these men committed suicide soon after being sentenced. The case is being worked into a play called 'Open Door' by Martin Malcolm [1].

The 2BU group for young LGB people, now based in Taunton, began in 2003 as a youth group for gay lads in Wells.[2]