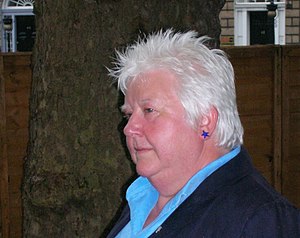 She was brought up in Kirkcaldy, Fife, and studied at St Hilda's College, Oxford,

She lives in Manchester and Northumberland.

Her novel Beneath the Bleeding won the Stonewall Writer of the Year Award in 2007.

In 2013 she delivered the Oxford University LGBT Lecture.

She was listed number 42 in the World Pride Power List 2013. The citation said:

"The Scottish crime writer and broadcaster said this year that she wants Kelly Smith, her partner since 2004, to become her wife when gay marriage laws are passed. She formed a civil partnership with Smith two years ago. McDermid shares custody of her son with her former partner."[1]