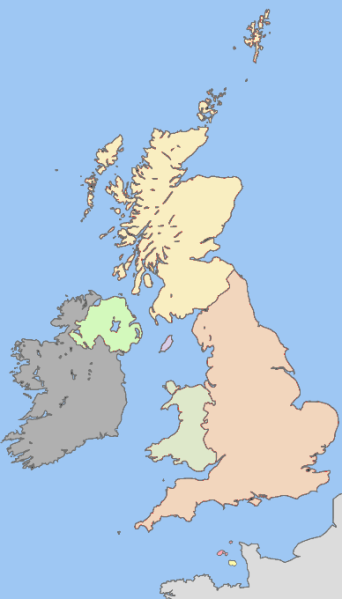 The British Islands. Click on any blue name for the article about the country.
England
Northern
Ireland
Isle
of Man
Wales
Scotland
Guernsey
Jersey
The United Kingdom of Great Britain and Northern Ireland (UK) is a nation state comprising four countries:

Great Britain (comprising England, Scotland, and Wales) is the largest island within the British Isles, but the term is often used interchangeably with the United Kingdom.

There are also three Crown Dependencies:

Based on the 2011 census, the population of the various constituents is as follows:

Coverage in this wiki

This Wiki covers the British Islands, and therefore includes the Channel Islands and the isle of Man as well as the UK.

Historically, England, Ireland, and Scotland were three separate countries. From early mediaeval times the Kings of England were Lords, and later Kings, of Ireland, but Scotland had its own Kings and Queens.

When James VI of Scotland became King of England (as James I) in 1603 the two crowns were united, but Scotland retained its separate government until it was united with England to form the Kingdom of Great Britain in 1707, under Queen Anne.

A report by the Pew Research Center in April 2014 revealed the UK as the sixth most tolerant of the nations surveyed in attitudes to homosexuality, with only 15% of respondents saying that homosexuality was morally unacceptable. The most tolerant nation was Spain with 6%.[2]