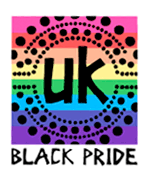 UK Black Pride logo
UK Black Pride, founded in August 2005 by Phyll Opoku-Gyimah, is an annual celebration for Black people, as well as their friends and families, who identify as LGBT. The organisation also organises a variety of activities throughout the year around the UK,

It began with a social outing by three coach-loads of lesbian and bisexual Black women to the sleepy seaside town of Southend-on-Sea in Essex.

During the build-up to that one incredible outing in Southend the concept evolved for an annual UK Black Pride event the following year, where Black LGBT men, women and trans people could foster a sense of pride in their identities. This enthusiasm from the patrons and sponsors who supported the launch of UK Black Pride on 18 August 2006 ensured the event was etched into LGBT history as the leading celebration of African, Asian, Caribbean, Middle Eastern and Latin American LGBT people from Britain, Europe and internationally. It also set the foundations to ensure that UK Black Pride becomes a permanent feature on the annual calendar of Pride activities.

Since 2006, UK Black Pride has grown from strength to strength because it has continued to secure the confidence, respect and support of the community, their friends and families. UK Black Pride’s organisers have maintained the core essence of being the only Black LGBT community Pride event to be genuinely designed, delivered and led by the full diversity of Black LGBT people.