Difference between revisions of "UCL" 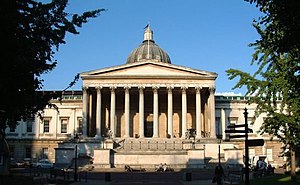 The University's foundation was partly inspired by Jeremy Bentham, philosopher and early advocate of the decriminalisation of homosexuality. His embalmed body, or "autoicon" is preserved at UCL.

Present or former staff include:

The UCL website has a set of LGBT student support pages.[4]