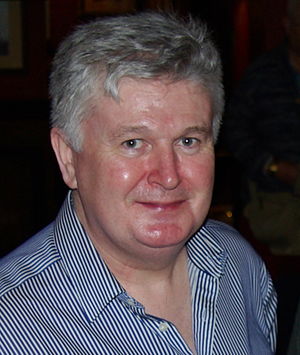 Stephen McKenna at The Brief Encounter, Croydon 2015
Stephen McKenna (born 1962),[1] is a journalist and photographer, and the founder of the Lately Gay online community for men coming out as gay later in life.

Stephen McKenna was born in Dublin, the son of the actor T P McKenna,[1] but now lives in London. He suppressed his gay urges from school days onwards, and got married. By the time he was 38 he realised that he was not bisexual, but really gay.[2] In 2002 he separated from his wife and came out aged 40 as a gay man, but found there was no one to turn to for support. In 2008 he set up Lately Gay to support other men in this situation.[3]