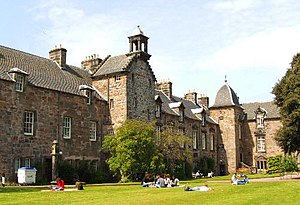 Quadrangle of St Mary's College
St Andrews is a town and former royal burgh in Fife, on the east coast of Scotland. The University of St Andrews is the oldest university in Scotland, and the town is also known as the home of golf.

For LGBT History Month 2015, Panti Bliss, described as "Ireland’s premier drag queen and gay rights activist", led a discussion on her life and dedication to LGBT and human rights in St Andrews.[1]

In September 2015, a hate preacher using a megaphone to blast out alleged anti-Muslim and anti-LGBT sentiments in St Andrews was drowned out by a young bagpiper.[2]