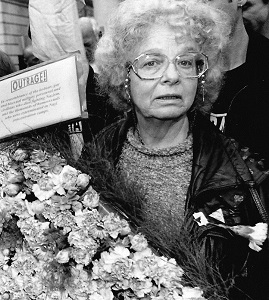 She was born Lotte Reyersbach in Germany in 1923. Her socialist father and Jewish mother both died in the Holocaust, but she managed to escape Britain in 1939, in one of the last "Kindertransport" ships that were allowed to leave Germany before the Nazis closed the borders. Her gay uncle, Kurt Bach, a left-wing activist, was arrested by the Gestapo in a gay bar in Berlin in 1937, and died wearing the pink triangle in the Sachsenhausen concentration camp.[1]

During the war Sharley worked as a nurse at Lewisham hospital, but suffered abuse for her German nationality; she was able to fit in better when she acquired a British surname by marrying the socialist Allen McLean. At the time of her marriage she had feelings for other women, but had no name for this.

"When Lewisham Hospital was bombed, we all shared rooms and even beds because the rooms were so small. We were together; we cuddled each other without giving it a second thought. I think we were naive sexually. One staff nurse would say there were two ward sisters who were 'homosexual ladies'. They used to tell people they weren't married because their boyfriends were killed in the First World War. I remember we used to look at them with curiosity. Ridiculous when you think how naive one was."[2]

She realised later that some of the women she worked with were lesbians. When one of them told her: "You're one of us, you know," she interpreted this as meaning she could pass for British, and took it as a huge compliment.[3]

In 1950, following an unsuccessful suicide attempt, a psychologist told her she was a lesbian, which came as quite a shock. She tried visiting the Gateways club, but didn't feel she fitted in there. In 1953 she began a long-term relationship with a West Indian woman, Georgina, but continued living with Allen for the sake of the children. Georgina died in 1977, having kept her sexuality secret, and Sharley was not allowed to attend the funeral. She then threw herself into politican activism with the Campaign for Homosexual Equality (CHE) and later the Terrence Higgins Trust.[3]

Since 1939 Sharley had been regularly listening to the speeches at Speakers' Corner, which she described as "the University of the Working Classes",[4] and it was there that she had met her husband. In the 1980s she started speaking there herself, on the “Hyde Parks Gays and Sapphics” platform, which she co-founded. They tried to demystify homosexuality, educate people about HIV and support gay people who had little understanding from those around them.[5]

"Every Sunday afternoon without fail for over 20 years she and a small group of lesbians and gays …would go to Speakers’ Corner with a step-ladder and brave the hecklers. I went along with them once and had a go at speaking. I lasted 2 minutes. Absolutely terrifying. But Sharley just kept going."[6]

In November 1997 she was the keynote speaker at the Queer Remembrance Day at the Cenotaph, organised by Outrage!.[7]

At Sharley's request, there was no funeral or memorial service for her, and her ashes were scattered at Speakers Corner.[4]