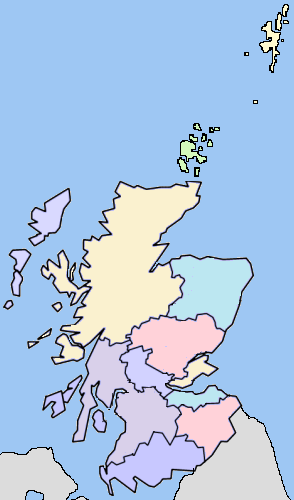 Scotland showing regions and island areas, 1973-1996. Click on any blue name for the article about the area.
Western Isles
Shetland
Dumfries &
Galloway
England
Borders
Fife
Central
Strathclyde
Northern Ireland
Orkney
Grampian
Tayside
Lothian
Highland
Scotland is one of the four countries that make up the United Kingdom. It was historically an entirely separate kingdom, but became more closely linked with England when the crowns of the two countries were united under James I in 1603. It retained its own parliament and government until the Act of Union in 1707 formed the Kingdom of Great Britain. It always had a separate legal system and other institutions, and since 1999 it has had its own devolved parliament and its own Government.

On 18 September 2014 the people of Scotland voted in a referendum to remain part of the United Kingdom.

Scotland's religious history is different from that of England. The national church, the Church of Scotland, is presbyterian, and does not have bishops, unlike the Scottish Episcopal Church, which is part of the Anglican Communion. The Roman Catholic Church is strong in certain areas.

The map shows the pre-1996 regions and island areas, which are the most convenient to display at this scale.

The current local government areas may be grouped by (former) region as follows:

Scotland was excluded from the Sexual Offences Act 1967 which partially legalised homosexuality in England and Wales; decriminalisation happened with the Criminal Justice (Scotland) Act 1980. See age of consent for progess since then.

Since devolution, Scotland has on some issues been ahead of the rest of the United Kingdom. For instance Patrick Harvie MSP proposed civil partnerships originally for Scotland alone (but this was in the end achieved by UK-wide legislation). In mid-2012 there seemed a real possibility that equal marriage would be achieved first in Scotland, but this turned out not to be the case: equal marriage was introduced by the Marriage and Civil Partnership (Scotland) Act 2014 which came into force on 16 December 2014. See Marriage equality (Scotland).

Scotland has long had its own LGBT organisations, separate from those in England or Wales, including:

LGBT Scotland provides a listings directory relevant to the LGBT+ community in Scotland.

Pride festivals have been held as follows: