Not to be confused with Richard Burton, the Welsh actor. 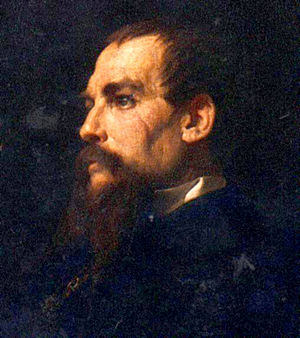 He was born in Torquay, but incorrectly claimed to have been born in the family home at Barham House in Elstree in Hertfordshire.[1][2]

In 1853 he disguised himself as a Muslim and undertook the pilgrimage to Mecca. Had he been discovered there as a non-Muslim he would probably been killed.

It is unclear whether Burton ever had homosexual relations, but he certainly investigated a male brothel said to be used by British soldiers, and the detail in his report has suggested to some that he may have been a customer. In his unexpurgated translation of the Arabian Nights he included a 14,000 word essay entitled "Pederasty" (Volume 10, section IV, D). Burton postulated that male homosexuality was prevalent in an area of the southern latitudes named by him the "Sotadic zone".

Burton is buried in the Roman Catholic cemetery at Mortlake, in a tomb resembling a tent.