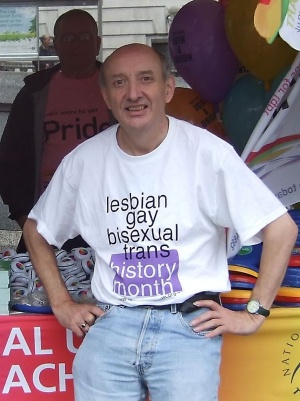 Paul Patrick
Paul Patrick (1950–2008) was a teacher and co-chair of Schools OUT and of LGBT History Month.

Paul Patrick was born in South Shields and studied English and drama at the Philippa Fawcett College, Streatham. In the 1970s he became almost certainly the first openly gay teacher in Britain to not only keep his job, but to get promoted.[1]

In 1974, while teaching in Lewisham, he co-founded the London Gay Teachers Group. In 1981 this became Schools OUT, which he co-chaired with a longtime friend and work colleague, Sue Sanders, from 2002.[1] In 2004 Paul Patrick and Sue Sanders set up LGBT History Month.