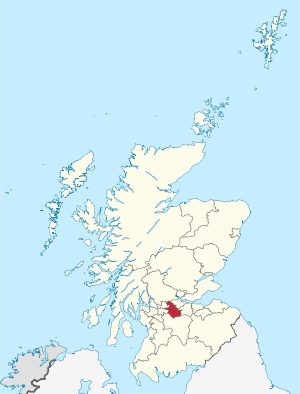 North Lanarkshire shown within Scotland
North Lanarkshire is a council area in Scotland. It was created in 1996, largely from the Cumbernauld and Kilsyth, Motherwell and Monklands districts in the former Strathclyde region. It contains some of the suburbs of Glasgow. The council covers parts of the traditional counties of Dunbartonshire, Lanarkshire and Stirlingshire.

The fashion designer Christopher Kane was born in Newarthill in 1982, and the writer Damian Barr grew up there.

In August 2012, THT Scotland invited the LGBT community in North Lanarkshire to have their say on local services.[1]