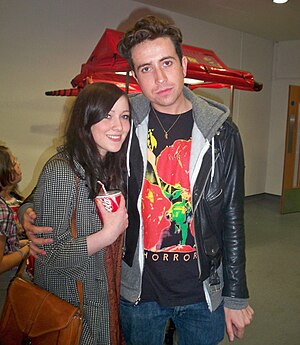 Nick Grimshaw with a fan in 2009
Nicholas Peter "Nick" Grimshaw (born Manchester, 1984), is a televsion and radio presenter.

Nick Grimshaw has confirmed that he is gay.[2]

He was rated number 8 in the Independent on Sunday's Pink List 2012; the IoS listing said:

The exceptionally likeable presenter officially became the biggest deal in radio when he took over the BBC Radio 1 breakfast show in September. That the newly-out Mancunian replaced former Stonewall Bully of the Year Chris Moyles makes his ascent all the sweeter.[3]