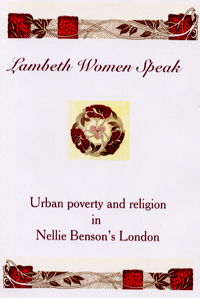 Cover of her book
Nellie Benson (Mary Eleanor Benson, 1863-1890) was the daughter of Edward White Benson, Archbishop of Canterbury, and his wife Mary Benson.

"Although also an avid sportswoman, excelling in tennis and a member of a lady's cricket team, she was not one of the notorious "new women," who challenged Victorian mores."[1]

She observed the lives of working-class women in Lambeth, and her observations were published posthumously as Streets and Lanes of the City[2]

Towards the end of her short life, Nellie had an affair with her mother's former lover, the composer Ethel Smyth.[3]