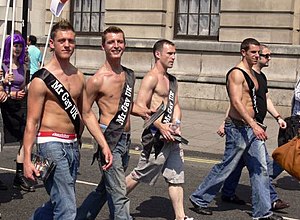 Several winners of Mr Gay UK marching at EuroPride 2006, London
Mr Gay UK is a British annual beauty contest for gay men, with regional heats held in gay nightclubs with a grand final usually at a gay venue. The contest is owned and promoted by gay entrepreneur Terry George.

It began in 1982 as "Mr Hardware" (named after a fragrance) designed to promote a gay mail order company. The event, held in the Heaven nightclub, was filmed by the BBC as part of a documentary entitled Something For the Ladies. In 1984 the name was changed to Mr Gay UK.