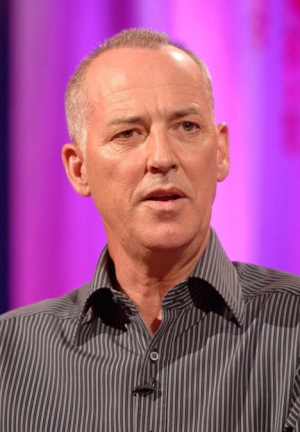 He was born and brought up in Bermondsey and worked as a redcoat in Butlin's holiday camps and then in the West End. He won the TV talent show New Faces in 1979, which led to a successful career as a television presenter in shows such as Strike It Lucky, My Kind of People, My Kind of Music and Kids Say the Funniest Things. He headlined the Royal Variety Performance in 1993.

"With his catchphrase of "awright", Barrymore is one of the nation's best-loved TV personalities, famous for game shows such as Strike It Lucky. Having recovered from a drink problem and the break-up of his marriage, he has moved into acting in the comedy Bob Martin."[1]

On 31 March 2001, Stuart Lubbock was found dead in the swimming pool at Barrymore's home in Roydon, Essex. Most of Barrymore's television shows shows were put on hold until all investigations were completed. Barrymore was charged for possession of cannabis in October 2001. He returned to filming and a new series of My Kind of Music began airing in February 2002. The inquest into the death of Lubbock commenced in September 2002 and the true extent of Barrymore's lifestyle, including drug taking and alcoholism was revealed. Barrymore's television career collapsed as a result of the scandal, and he emigrated to New Zealand to live with his partner, Shaun Davis, returning in 2006 to take part in Celebrity Big Brother.[2]