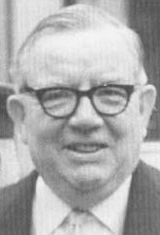 He was born at his grandmother's farm just outside Youlgrave, Derbyshire and grew up at a house called Mona View in Over Haddon. He went to school in Bakewell, and studied history at Victoria University of Manchester, where he graduated with a first class degree and was elected to a fellowship.

During World War II, he served as an officer in the Intelligence Corps, mainly in Egypt.

After the war, Oldfield joined MI6 (the Secret Intelligence Service or SIS). From 1973 to his retirement in 1978 he was Director of the SIS.

In 1979 the new prime minister, Margaret Thatcher, asked Oldfield to coordinate security and intelligence in Northern Ireland. Shortly afterwards it was discovered that he was using the services of male prostitutes. He was subject to a security review to ensure there had not been blackmail or pressure from Soviet counter-intelligence. When nothing was discovered, he was told to curb his behaviour and left in his Northern Ireland post. In a statement on the matter to the House of Commons in 1987, Thatcher said: "he had contributed notably to a number of security and intelligence successes which would not have been achieved had there been a breach of security."[1][2]