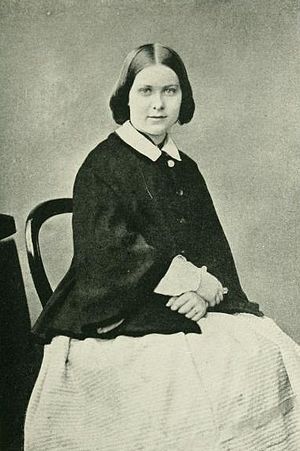 Mary Benson in her 20s
Mary Benson (née Sidgwick, 1841-1918, known as "Minnie" or "Ben") was the wife of Edward White Benson, Archbishop of Canterbury.

She was born in Skipton, Yorkshire, the sister of the philosopher Henry Sidgwick. She was proposed to, aged 12, by her second cousin Edward Benson. They were married in 1859, and lived initially at Wellington College, Berkshire, of which Edward was the first headmaster. By this time she had already had the first of her lesbian affairs, which she referred to as "swarmings". She and Edward had six children, including the writers E F Benson, A C Benson, R H Benson, and the amateur Egyptologist Margaret Benson. Their youngest daughter Nellie Benson had an affair with the composer Ethel Smyth, who had been Mary's lover.[1]