From LGBT Archive
Revision as of 13:03, 21 October 2012 by Ross Burgess (Talk | contribs) (Creating a page based on the Wikipedia article (which will need cleaning up).)
(diff) ← Older revision | Latest revision (diff) | Newer revision → (diff)
Jump to: navigation, search

Manchester Pride is an annual pride festival and parade held each summer in Manchester. It is one of the longest running in the country and attracts thousands of visitors to the city's Gay Village, centred around Canal Street, each year. Events within the Village require a paid-for Pride wristband for entry.[1] 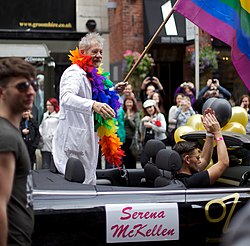 Currently there is some confusion over the date of the first LGBT August Bank Holiday fundraiser. In 2011 a colour photograph was published on the Manchester Pride website. This shows a jumble sale on Canal Street and Solway House on Aytoun Street can be seen in the background. Research done by the Facebook group Facts About Manchester Pride found that this building no longer existed by August 1990; it had been demolished to make way for the tram system and court extension. So the colour photo seems to show an event from a date earlier than the middle of that year. Ironically this colour photo was published by Manchester Pride as part of its supposed 21st birthday.

At some time in the second half of the 1980s, the event began as a jumble sale outside the Rembrandt Hotel. It was not a Pride event in those days. This is confirmed by a booklet that the Village Charity published for its annual general meeting in 1994, which states: "many volunteers of the charity get upset when the press call our weekend the 'Northern Pride'. It's not and never has been." The purpose was solely to raise money for HIV and AIDS causes and in particular for the ward at Monsall Hospital where people received treatment. In 1991 the event was expanded to include a full programme of activities from Friday to Monday and it was christened "the Carnival of Fun Weekend". The jumble sale moved into Sackville Park. On the Monday night there was a substantial fireworks display that was funded by the North West Development Agency and it was announced that good-luck telegrams had been received from Diana Princess of Wales and other high-profile people.

Over the following years, the event grew and was known as Mardi Gras. It developed with support from the VBA (Village Business Association). According to a report in the Pink Paper just after the 1996 Mardi Gras, the Village Charity hoped to top the £77,000 raised with a further £50,000 from donations included in ticket sales to the Sunday Freedom GALA at the G-Mex centre. Entry tickets and fences were first introduced during the council-run event in 1999, but despite a large income, there was no money for charity that year.[2] As a result, the event reverted to community control in 2000, 2001 and 2002. From 2000 to 2001 the event was called Gayfest and was organised and managed by a committee of volunteers led by local businesswoman Julia Grant. During this time the Gayfest team bid for, and won, the right to host Europride in 2003.

In 2002 the event reverted to the name MardiGras and was organised by a committee of the Village Business Association. During these three years, no entry fee was charged, yet money was still raised for charity. In 2003, about 37,000 people paid for tickets for EuroPride which was hosted that year by Manchester. This can be gleaned from the fact that Operation Fundraiser sold the £10 tickets and gathered £388,946 from tickets and bucket collections, with a final figure of £127,690 for good causes.

At the closing ceremony in 2003, it was announced that the event would be now be known as "Manchester Pride" (the manchesterpride.com domain name was registered by the web designers on behalf of Pride in April 2003) and in 2007 it became a charity in its own right (charity number 1117848). One reason for this change was because in 2006 Customs and Excise had tried to charge back VAT for several years, because, in their view, Manchester Pride was no longer a charity fundraiser. Increasing commercialisation meant that a dwindling percentage of the income reached a final good cause. By 2010 just over 11% of Manchester Pride's total income was reaching a good cause in the end.

The event has had a turbulent history due to disputes between Manchester City Council, police, the community itself and local gay businesses and charities. As a result its name has changed a number of times.[3][4] Arguments often centre around how it is run and how funds are raised.[5][6] Since Europride 2003, the event has been organised by a Pride committee, in conjunction with Marketing Manchester, the Lesbian and Gay Foundation, and George House Trust. The area is once again cordoned off and gated, and wristbands must be bought to gain entry to the "compound".

During the August bank holiday weekend of Manchester Pride, the city's gay village becomes a gated area; attendees must pay for a wristband in order to gain access to the village. The gated system and entry fee have been in place since 2003,[7] however, the candlelight vigil held in Sackville Park each Pride does not require a wristband for entry.[8] Additionally, the parade, starting on Deansgate, is free for anyone to watch and does not take place within the gated zone.

Criticisms have arisen over the closed nature of the event, with those against the policy describing it as a "prison".[9] Pride organisers have rebutted the accusation, saying it increases safety and, by purchasing a ticket to enter, this gives Manchester Pride an increased income that will be donated to charities.[8] Additionally, though the wristband offers access to the village and its arena, where music performances are held, certain bars and clubs within the vicinity charge their own entry fees. Manchester Pride noted the issue, stating, "we ask that bars do not charge an entrance fee during the Big Weekend; however this is something we cannot enforce".[8]