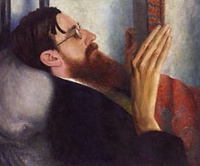 Dora Carrington makes reference to Strachey having slept with a guardsman in 1929 [4].