Difference between revisions of "London Pride"

Pride in London logo
London Pride is an annual event in London, comprising a march or parade in central London, together with a rally or festival, and sometimes other events.

Gay Pride Marches, subsequently re-branded as Pride Marches and now Pride Parades (see Pride) have been held in London since the early 1970s, normally on the nearest Saturday to 28 June, the anniversary of the Stonewall riots.

From 2004 to 2012, the London Pride events were organised by the charity Pride London.

Following widespread dissatisfaction following the last minute scaling back of World Pride 2012, the Mayor of London, Boris Johnson, invited community bodies to bid to run future Prides. In January 2013 it was announced that a community interest company London LGBT Community Pride had been awarded the right to run Pride for five years starting 2013.[1] The company is now branded as Pride in London.[2] 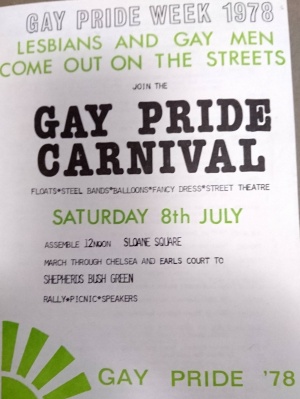