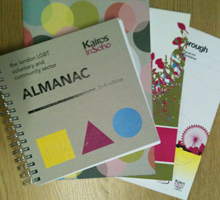 The Almanac and other Centred publications
The London LGBT Almanac was a resource maintained by Centred (formerly Kairos in Soho). The information came from surveys of organisations in August-September 2010 and in November 2011-January 2012, and subsequently updated by organisations themselves. It has been published in paper form in three editions (2011, 2012 and 2014).

The Almanac is complemented by a list of London LGBT organisations which was available online as a wiki,[1] but has now disappeared following the decision of Wikispaces to make a charge for hosting non-educattional sites.[2]