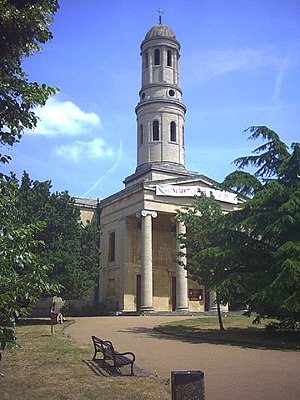 St Anne's Church, Wandsworth
The London Borough of Wandsworth is an inner London Borough, south of the Thames, originally part of Surrey. Apart from the town of the same name, localities within the borough include Balham, Battersea, Putney and Tooting.

Prior to 1965 the old Metropolitan Borough of Wandsworth included Clapham and Streatham, but these became part of the London Borough of Lambeth although Clapham Junction Station and part of Clapham Common remain in Wandsworth.

The Wandsworth-Richmond CHE Group was founded in 1972.

There is a Wandsworth LGBT Forum.[1]